Now that we are starting our courses it is good to reflect on the reasons why we choose an active teaching approach instead of  the transmission-based methodology.

Traditionally, the transmission-based method has been dominant in education. Nowadays, it seems totally extemporaneous and counterproductive.

On my first blogpost I wrote that it is useless to base fomal education in the transmissive model due to the vast amounts of information provided by the advent of the Information and Knowledge Society. I got the feeling that to give or to receive transmissive-based lectures at the university was not working anymore and that it was even ridiculous.  As a lecturer I use this system from time to time when it is real necessary:  if I have to give more “processed” information, if I have to introduce a topic to situate learners, to save time, because what is to be learned is hard to understand, etcetera.

The next video is just an example of the consequences of certain lectures that are going on in the world:

The ways of student Bliss can be arguable and not suitable but his claims are crystal clear. There is a crazy scenario created by the unbalanced transition between the old world and the new world. The former is based on examinations  in formal education terms: to dump what has been memorize just before an absolute oblivion. Is this what we re looking for as educators? Is this the ends of education? I believe not.  Personally, I prefer to work on a few (important) things in a situated and significant way, specially from an active perspective.

The “transmission of information’s torture” often means a lack of pedagogical savoir faire and a few knowledge of what is to be taught. And this is felt by the students. It is an information that has been insufficiently learnt by the emitter that transmits information in a plain, unconnected and superficial. This leads  to  boredom. If a former victim of mine of “trasmission of information’s torture” is reading this, my sincere apologies. It was not sadisme; I didn’t know what I was doing.

According to the mismatches between the old world’s and the new world’s teaching methods, two years ago Dr. Miquel Àngel Prats professor of Universitat Ramon Llull, wrote a tweet about “Petite Poucette” (2012), a book by the French philosopher and Stanford professor Michel Serres. It was a great finding (it is a proof that networks are not always confusing us. It is just a matter of building a good PLE :-)). Well, the book describes the mismatch between the old world (modernity in the Enlightenment, the monolitic, etcetera) and the present world  (postmodernity, liquidity, hyperconnectivity, …). It elicits the rigidity of certain institutions of society and culture and where education is not an exception. And it is quite funny that it is written by an octogenary man.

Serres says in a compact style: With the written form, Greeks invented paideia; after the press was created, pedagogy treaties started to wander around. Today? I repeat, ¿what should we transmit? knowledge? But how if it is already available and objectivated across networks. Transmit it to everyone in the world? From now on, knowledge is accessible to everybody. How can we transmit it? It is done already.

Knowledge is already “transmitted and distributed”. Therefore we don’t have to transmit it. We can also access it from the little smart device we carry in our pockets, wherever and whenever we please. This does not mean that school of formal education have lost its meaning because everything is taught or learned. That would be false. There is a lot to do, maybe more than ever! and a big range of ways to promote learning rather than knowledge transmission.

With the objective of learning certain concepts, processes, competences, skills, attitudes and values we must create activities that make our students get in touch with knowledge; that it connects with what we already know.  That we, educators and students, make it ours. This is why active education and intersubjectivity is so important. Thus, transmission for transmission’s sake -and it is something that goes much further than death by powerpoint, which is necessary but just aesthetic-must cease.

It is important to promote inquiry, debate, collaboration, information management, work with information streams, and to implement information digital literacy skills (the learning to learn concept, criticized by many outside and inside the educational sectors). With this complex scenario it is fundamental to make space to engagement and creativity.

We are talking about how to organise teaching and learning. Without this change there are no skills nor competences and even less learning. The idea of “sage on the stage” to “a guide on the side”  written by Alison King had total sense in 1993. Today, it is totally necessary.

Education forgot its ends during Modernity. Postmodernity is reversing this error.

If the Enlightenment’s educational project failed, today we find all the ingredients for its success.

Are we living in a time of no-education? This question arised from a conference made by Dr. Salvi Turró in 2014. It was entitled “Education and Enlightenment” and dealed with how the Enlightenment’s educational project simply failed. Kant, Schiller and Fichte were aware that education was being limited to the “erudition/scholarship/culture” elements, without taking into account the education ends.

According to Kant, there were three moments in the education of the child/youngster. First, a necessary negative moment: discipline learning. A second positive moment of competence and skills learning (afforded by the child’s cognitive development). This led to the third and last moment which relates strictly to education (Bildung) where we find personal autonomy, the sense of duty and the acknowledgement of rational human beings alike. This third level is what is known as being educated. If we limit education to the first two moments then we would be talking about mere training: the no-education. Educating implies the establishment of purposes that put everything together and shape human beings.

The main idea of the conference was that moral ideals were forgotten in children and youth education in favour of teaching technical knowledge and social sciences (the instrumental rationality). The Enlightenment forgot about Humanity’s ends which were precisely the elements on which it was rooted. This same problem was radically identified by Rousseau himself several years before as one of the biggest problems of human beings: a senseless education decorates our intelligence and corrupts our minds. (…) Huge buildings costly educate our youth teaching them all the things, except their duties. 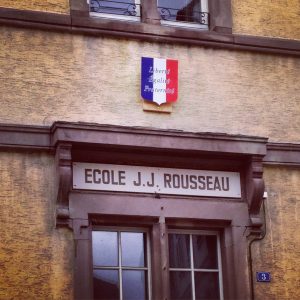 At the end of the conference, the speaker posed the next question: If education today is based on the Information and Knowledge Society, Kant, Schiller and Fichte would say that our educational system is a system for no-education. Is it really that we are living a an age of “no-education”?

Modernity, which appeared after the Enlightenment, brought ends and moral (values) to society, but it ended up in barbarity (i.e: capitalism, positivism, socialism, communism, futurism, fascism and an excess of aesthetics). In the 21st Century, Postmodernity meant a crisis of these principles, and their atomization and liquation. But something wonderful is going on: the 21st century is opening its doors to knowledge, what the Enlightenment intellectuals were longing for humanity. Data is growing just as much as knowledge, rapidly and sometimes exponentially. And this is what is making impossible -yes, impossible- an education based on information transmission and on the Encyclopaedia. It’s absolutely useless now.

Nowadays, there is an active appropriation of contents by the student, a knowledge re-elaboration and also the necessary learning of skills (Kant’s negative moment of education). The traditional learning limits are surpassed. The informal education power is recognized and is stepping into the classroom, just like games, narratives and emotions. The classroom is being redesigned and connected to the world. The curriculum is no longer something to be taught in a linear and compartmentalized way. It is approached in an interdisciplinary and active manner. It has to be significative, collaborative, and situated through project activities and problem-based learning, with the help of real methodologies and tools.

There is a permeability like never before in the walls of formal education. Is there an alternative? Education is redefining its ends. The Information and Knowledge Society puts the Encyclopaedic education to an end and, step by step, it tends to the learning to be and to the learning to live together, two pillars of education that were fixed by the UNESCO reports.

All those failed ideals of the Enlightenment’s education project can succeed today. Education has to relocate Modernity’s no-education ways because they are of no use for today’s Humanity’s needs. I have the impression that there is a lot of hope and optimism for this readjustment. This is shown by the numerous educational initiatives worldwide, collective and individual and under several names and tags, that aim to reach to a wider audience.

The current educational project (or projects) should prevail over barbarity. But, as it occurred during the Enlightenment, we can still spoil it. I am afraid maybe we will have to talk about it in another time. For now, let’s retain this idea: “Man can only become man by education. He is merely what education makes of him. (…) It is delightful to realise that through education human nature will be continually improved, and brought to such a condition as is worthy of the nature of man. This opens out to us the prospect of a happier human race in the future.. (…) (Immanuel Kant, 1803).

Background music: Another Brick in the Wall (Pink Floyd, The Wall 1979):